At All Fire Solutions, we are committed to providing a complete range of fire protection solutions and services. We strive to help others better understand the impact and benefits of various types of loss prevention technologies. Due to our extensive experience we design and install both chemical and water based systems in addition to hazard analysis and code review. 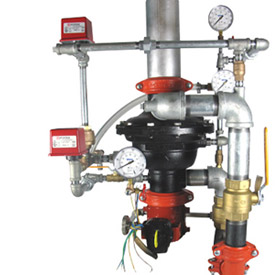 These statistics are staggering. The financial impact and loss of billions affects commerce, businesses, employees and families. Protecting your people, facilities and physical assets from fire is a fundamental responsibility of any business owner. Contact All Fire Solutions for information on protecting both life and property. 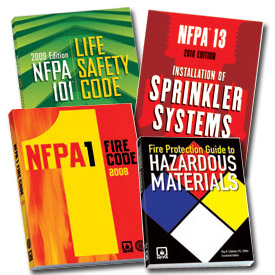 What is Hazard Analysis and what does it entail? The purpose of Hazard Analysis is to determine the expected outcome of a specific set of conditions called a scenario. The scenario includes details of the room dimensions, contents, and materials of construction; arrangement of rooms in the building; sources of combustion air; position of doors; numbers, locations, and characteristics of occupants; and any other details that will have an effect on the outcome of interest.
Hazard Analysis can be thought of as a component of risk analysis. That is, risk analysis is a set of hazard analyses that have been weighted by their likelihood of occurrence. The total risk is the sum of all the weighted hazard values. In the insurance and industrial sectors, risk assessments generally target monetary losses since these dictate insurance rates or provide the incentive for expenditures on protection. 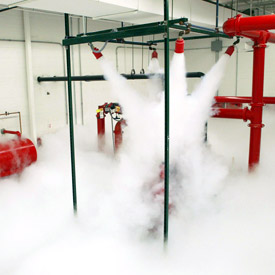 FM-200® is the clear choice for a fast, clean fire protection agent. Introduced as a Halon replacement in 1993, it quickly gained acceptance as the world’s leading clean gaseous fire extinguishing agent. When it comes to fire protection, there can be no compromise.

FM-200® extinguishes fire via a combination of chemically based fire inhibition and cooling. It is environmentally acceptable, safe to use with sensitive equipment, fast-acting, efficient and effective. FM-200® extinguishes fires primarily by physically cooling the flame; removing heat from the flame to the extent that the combustion reaction cannot sustain itself.

FM-200® fire suppression systems work hand-in-hand with state-of-the-art control and detection components to identify and extinguish fires, long before substantial fire damage can occur. Without changing your current control panel or detection systems, an existing system can be easily converted to FM-200®.

Test after test supports the conclusion that FM-200® is as safe for humans as it is effective at fighting fires, leaving no harmful or messy residue. FM-200® must be used with properly designed, installed and maintained equipment for maximum fire protection and coverage. When it comes to fire protection there can be no compromise – contact us to day to learn more about our FM-200® system solutions

CO2 is fast, efficient, cost-effective and adaptable for a wide range of hazards. The discharge of CO2, a low cost clean agent, is non-damaging to property and electrically non-conductive. Multi-hazard, high risk protection can be designed to provide automatic, simultaneous discharge for a variety of hazards and configurations using high and low pressure systems. Low pressure systems and equipment are best suited for applications where large quantities of CO2 are needed. High pressure systems are recommended for smaller hazards or where space is limited. We work with each client to select the system best suited to an application based on performance, costs, logistics, maintenance, and personnel safety.

Fast & Effective – CO2 is a three-dimensional clean agent. Within seconds, it penetrates the entire hazard area to smother the combustion

Efficient – CO2 is colorless and odorless. It exists as a gas in the earth’s atmosphere and is one of the byproducts of combustion

Non-Conductive – CO2 is electrically non-conductive and three-dimensional, allowing use for a wide variety of special applications

Recognized – by the top independent listing and approval agencies

Non-Damaging – CO2 is normally harmless to equipment, materials and property. It does not cause spoilage, requires no clean-up and leaves no residue, thus minimizing downtime after a fire

The wet pipe system is the simplest and most common type of fire sprinkler installation. Wet systems are frequently installed in factories, warehouses, and office buildings where the potential for freezing does not exist. A wet pipe system riser can employ a check valve along with an electric water flow indicator and electric alarm, or for installations requiring a mechanical alarm, we offer an alarm check valve and water motor alarm.

Dry Pipe Systems are frequently installed in areas subject to freezing temperatures, such as unheated storage areas and loading docks. System operation is similar to Wet Pipe Systems, except that the system piping is charged with compressed air or nitrogen instead of water. The entire system is designed to permit quick, easy maintenance and constructed so it rarely needs any. All components are fast acting, rugged, and durable enough to provide long years of dependable operation. 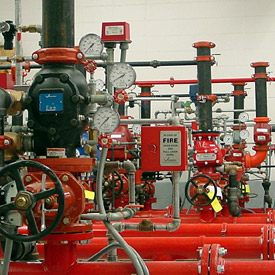 Preaction Systems are most frequently used to protect against accidental water discharge, or to speed the action of large dry pipe systems. Common installations include computer rooms, process control rooms, libraries, and freezers. Often, a Preaction System is specified to replace a gas- based extinguishing system. The Single-Interlocked Preaction System requires activation of the detection system before allowing water to flow into the closed sprinkler system piping. This helps prevent unwanted water flow when a pipe or sprinkler is accidentally broken.

Similar to the Single-Interlocked Preaction Systems, Double Interlocked Systems require activation of both the detection system and a sprinkler before allowing water to flow into the sprinkler system piping. This configuration provides even more protection against accidental discharge of water. Installations include computer rooms, process control rooms, libraries, and freezers.

Deluge Systems provide fast and total wetting of protected areas, and are frequently used in extra-hazard risks such as aircraft hangars, power generating stations, and petrochemical facilities. For dependable, hazard-specific operation, Deluge Systems can include a manual, pneumatic, hydraulic, or any type of electric detection/release system.

The Firecycle® System turns off the water flow after the fire is extinguished, and even turns itself back on again if the fire rekindles. With a Firecycle® System, there is no water in the piping until a fire condition exists – the leaks and accidental water discharge common with other types of on-off systems are eliminated.

A Firecycle® system is a wise choice for any installation requiring dependable protection with limited water flow.